The making of Studio Birdcage Part 1: So many false starts

Sometimes the best way to move forward is to burn it all down... I think.

Starting a new project for a client is nothing like starting a new project for yourself. With a client, I usually have a set of goals to hit. A list of objectives that need to be completed and a firm budget with milestones and due dates. Sometimes these things will change during the development cycle but for the most part there is a clear route to the finish line. When starting a project for myself it seems all of that goes out the f***ing window.

The idea was simple, build a portfolio to display my work and market my skills. It seemed so simple. I mean at that point I have been working as a developer for nearly 5 years and had dozens of projects under my belt. I could have just made a simple design, built out a static site and launched it in under a week. But that would have been to easy, or at least that is what I told myself. Instead, I went a different route and thus began the 8+ months that will forever be known as THE STUDIO DAYS.

I decided that a simple static site was not going to cut it. It may have been the easier (and faster) route, but the thought of constantly updating a static site (again) was daunting. My old portfolio was developed using Jekyll. I picked Jekyll so that I could build a static site that would leverage templates to easily create new project pages. However, over time the templates became cumbersome and bloated and adding content was tedious. With the new site I didn't want to get into the same situation so I decided that I would use some kind of content management system. The real question was what to use. The state of web development is always changing and there are a million different options to pick from. I thought about diving back into WordPress. It was something I was very familiar with and the new Gutenberg system sounded very interesting (it still sounds interesting and hopefully it get better with time as the rollout has not been great) but I didn't want to be saddled with the restrictions of the WordPress platform. More to the point, I didn't want to be saddled with the restrictions of any platform. So why not build one, how hard could it be.

The design process might be one of my favorite parts of any new project. However, when working without a budget or real concern for billable hours, it can also be a very long process. Designing Studio Birdcage was no speedy task. I had an idea for what I wanted the site to achieve but for some reason could not pin down how i wanted it to look. In the end this site went through three complete redesigns, one coming half way through development. I was also developing the CMS in tandem with the site so in reality I was designing two separate pages at once (the CMS and the front end). 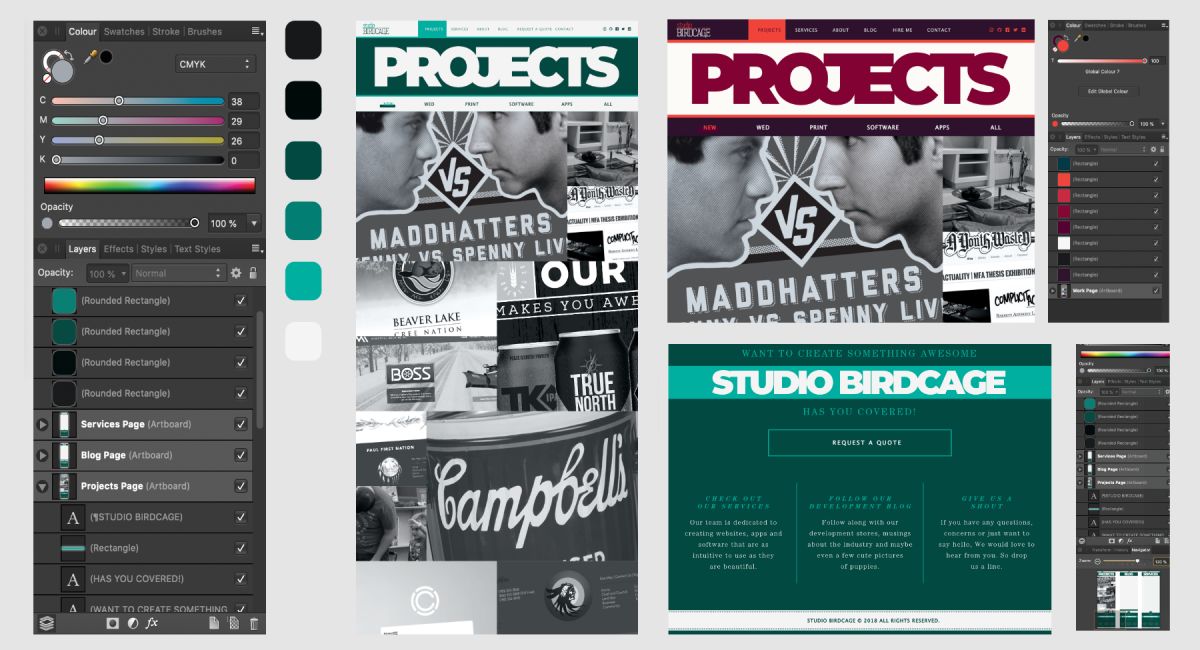 With design No.1, I wanted to create a bold look that would really standout. I was using massive solid block letters for headings and went through a few different bold color pallets. I liked parts of the design but it didn't feel very original. I was using a standard top/sticky navigation bar and the page flow was not overly inspired. It was also a little to boxy for my liking and while I liked the colors, they ended up taking away to much focus from the content.

The Making of Studio Birdcage Part 2: Building a Backend

Content Management Systems are the bee's knees. That being said, I have never found one that I felt I truly enjoyed using. So when I started planning the build for Studio Birdcage, the solution was obvious. Why not build your own. I mean how hard can it be!

The Making of Studio Birdcage Part 3: Launch and beyond

After much longer than I would like to admit, Studio Birdcage is live (kinda). It is still very much in beta but stable enough not to crash constantly. Which is nice. In the dramatic third act of this development story, I impart all the knowledge I have gained on this journey and might even tease some future plans.

Adobe Photoshop CC is the industry standard at this point. There is really no arguing that. So, I figured it was time that someone sat down and wrote out a list of like ten things that they find super cool about Photoshop. That is a pretty novel idea... Right!